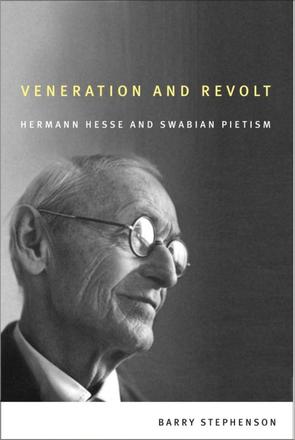 One of the most widely read German authors in the world, Hermann Hesse (1877-1962) won the Nobel Prize for Literature in 1946. After his death, his novels enjoyed a revival of popularity, becoming a staple of popular religion and spirituality in Europe and North America.

Veneration and Revolt: Hermann Hesse and Swabian Pietism is the first comprehensive study of the impact of German Pietism (the religion of Hesse’s family and native Swabia) on Hesse’s life and literature. Hesse’s literature bears witness to a lifelong conversation with his religious heritage despite that in adolescence he rejected his family’s expectation that he become a theologian, cleric, and missionary.

Hesse’s Pietist upbringing and broader Swabian heritage contributed to his moral and political views, his pacifism and internationalism, the confessional and autobiographical style of his literature, his romantic mysticism, his suspicion of bourgeois culture, his ecumenical outlook, and, in an era scarred by two world wars, his hopes for the future. Veneration and Revolt offers a unique perspective on the life and works of one of the twentieth century’s most influential writers.