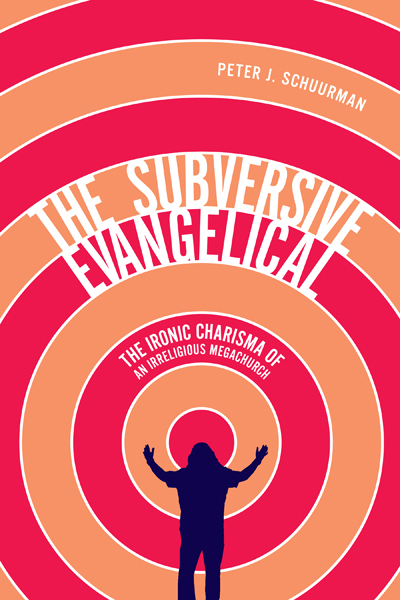 A close investigation of a new wave of “reflexive evangelicals,” whose playful critique of their own faith wins crowds.

Evangelicals have been scandalized by their association with Donald Trump, their megachurches summarily dismissed as “religious Walmarts.” In The Subversive Evangelical Peter Schuurman shows how a growing group of “reflexive evangelicals” use irony to critique their own tradition and distinguish themselves from the stereotype of right-wing evangelicalism.

Entering the Meeting House – an Ontario-based Anabaptist megachurch – as a participant observer, Schuurman discovers that the marketing is clever and the venue (a rented movie theatre) is attractive to the more than five thousand weekly attendees. But the heart of the church is its charismatic leader, Bruxy Cavey, whose anti-religious teaching and ironic tattoos offer a fresh image for evangelicals. This charisma, Schuurman argues, is not just the power of one individual; it is a dramatic production in which Cavey, his staff, and attendees cooperate, cultivating an identity as an “irreligious” megachurch and providing followers with a more culturally acceptable way to practise their faith in a secular age.

Going behind the scenes to small group meetings, church dance parties, and the homes of attendees to investigate what motivates these reflexive evangelicals, Schuurman reveals a playful and provocative counterculture that distances itself from prevailing stereotypes while still embracing a conservative Christian faith.