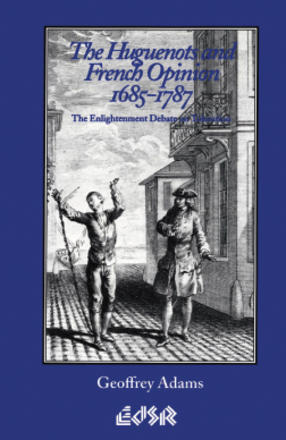 The decision of Louis XIV to revoke the Edict of Nantes and thus liquidate French Calvinism was well received in the intellectual community which was deeply prejudiced against the Huguenots. This antipathy would gradually disappear. After the death of the Sun King, a more sympathetic view of the Protestant minority was presented to French readers by leading thinkers such as Montesquieu, the abbé Prévost, and Voltaire. By the middle years of the eighteenth century, liberal clerics, lawyers, and government ministers joined Encyclopedists in urging the emancipation of the Reformed who were seen to be loyal, peaceable and productive. Then, in 1787, thanks to intensive lobbying by a group which included Malesherbes, Lafayette, and the future revolutionary Rabaut Saint-Étienne, the government of Louis XVI issued an edict of toleration which granted the Huguenots a modest bill of civil and religious rights.

Adams’ illuminating work treats a major chapter in the history of toleration; it explores in depth a fascinating shift in mentalités, and it offers a new focus on the process of “reform from above” in pre-Revolutionary France.