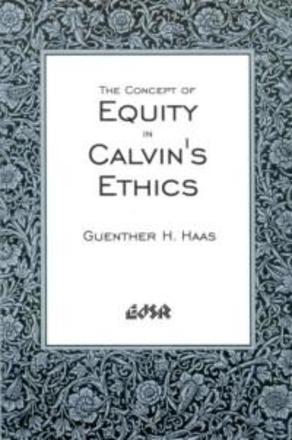 Ever since Calvin wrote his Institutes of the Christian Religion, admonishing the reader that “it would not be difficult for him to determine what he ought especially to seek in Scriptures, and to what end he ought to relate its contents,” scholars have endeavoured to identify a doctrine or theme at the heart of his theology. In his landmark book The Concept of Equity in Calvin’s Ethics, Guenther Haas concludes that the concept of equity is the theme of central importance in Calvin’s social ethic, in a similar way that union with Christ lies at the heart of his theology.

In the heart of this study, Part Two, “Equity in Calvin’s Ethics,” Haas presents a thorough exposition and analysis of the extensive role the concept of equity plays in Calvin’s ethics, demonstrating that Calvin’s approach to ethics is not restricted to meditation of Scripture text.

This book will force a re-examination of approaches to Calvin studies that have not appreciated the historical context and background of Calvin’s thought. The Concept of Equity in Calvin’s Ethics establishes that the Protestant tradition in Christian ethics, founded by Calvin, has a distinctive and vital contribution to make to Christian ethics, as well as to the broader discussion of social ethics as they are practised today.