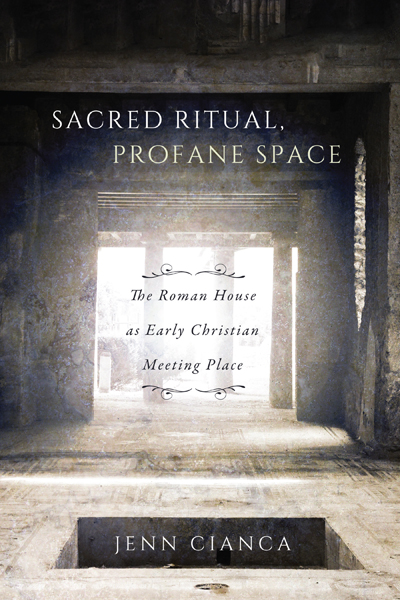 A reassessment of earliest Christian worship spaces as a crucible of sanctity, identity, and cultic affiliation.

The first three centuries of Christianity are increasingly seen in modern scholarship as sites of complexity. Sacred Ritual, Profane Space examines the Christian meeting places of the time and overturns long-held notions about the earliest Christians as utopian rather than place-bound people.

By mapping what is known from early Christian texts onto the archaeological data for Roman domestic spaces, Jenn Cianca provides a new lens for examining the relationship between early Christianity and sites of worship. She proposes that not only were Roman homes sacred sites in their own right but they were also considered sacred by the Christian communities that used them. In many cases, meeting space would have included the presence of the Roman domestic cult shrines. Despite the fact that the domestic cult was polytheistic, Cianca asserts that its practices likely continued in places used for worship by Christians. She also argues that continued practice of the domestic cult in Roman domestic spaces did not preclude Christians from using houses as churches or from understanding their rituals or their meeting places as sacred.

Studies in Christianity and judaism

Vision, Authority, and the Limits of Humanity in the New Testament and Early Christianity
By Jared C. Calaway
November 2019
Matière à pensée