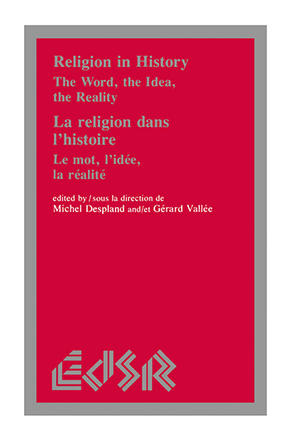 The history of the concept of “religion” in Western tradition has intrigued scholars for years. This important collection of eighteen essays brings further light to the ongoing debate. Three of the invited participants, W. C. Smith, M. Despland and E. Feil, has each previously written impressive books treating this subject; the last two acknowledged the impact and continuing influence of Smith’s work, The Meaning and End of Religion.

An introduction and a recapitulation of Smith’s contribution as a scholar set the stage for a retrospective look at the published literature. Contributors then examine the transformation of words (the classical religio to the modern religion), particularities of religion in nineteenth-century France, Troeltsch’s concept of religion, the study of religion from an Asian point of view and the categorization of “World Religions. ” The concluding essays elaborate contemporary anthropological, cross-disciplinary, semiological, deconstructive and psychoanalytical methodological approaches to the concept and study of “religion. ”

Exploring critically different aspects of the concept and study of religion, these provocative essays typically reflect the methodological pluralism currently existing in the field of Religious Studies. Of interest to scholars and students alike, this collection also contains a complete bibliography of W. C. Smith’s publications.