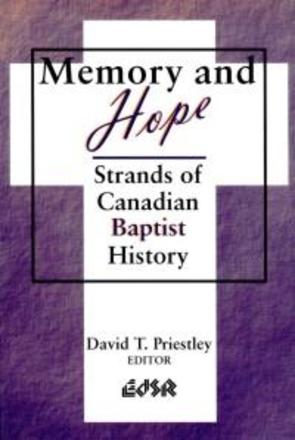 How are Baptists distinctive as a Christian denomination? Canadian Baptists, confronted with the question of discovering a common identity from the welter of strands of influence that make up their heritage, may infer several answers from the essays in Memory and Hope.

Focussing on Baptist history in central and western Canada, Memory and Hope discusses individuals, institutions and issues that have stirred Baptists in North America for two centuries, including confessionalism and eucharistic theology and fundamentalism vs. modernism. Recurring themes include the Baptist role in education in Canada, the establishment of new churches, overseas missions and social responsibility.

Essayists also examine the powerful forces that have influenced Baptist history: immigration, theology and society. Studies of missionary Samuel Stearns Day, fundamentalists Aberhart, Maxwell and Shields and social gospellers Sharpe and Shaw illustrate the diversity of ideas and personalities that have shaped and been shaped by the Baptist Church.

Memory and Hope is an important resource for the history of the Baptist Church in Canada. In the issues it raises on the role of churches in the twenty-first century, it will also make a significant contribution to the study of religion in general.