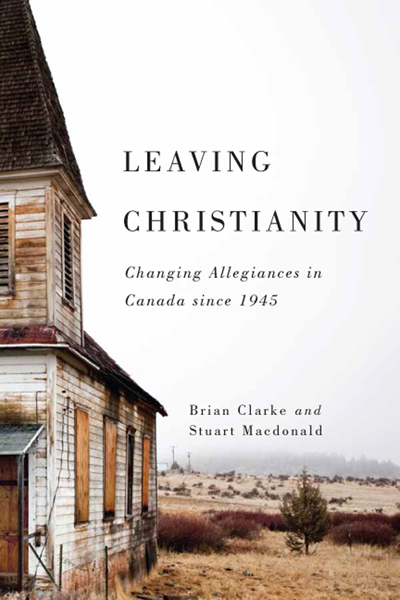 Canadians were once church-goers. During the post-war boom of the 1950s, Canadian churches were vibrant institutions, with attendance rates even higher than in the United States, but the following decade witnessed emptying pews. What happened?

In Leaving Christianity Brian Clarke and Stuart Macdonald quantitatively map the nature and extent of Canadians’ disengagement with organized religion and assess the implications for Canadian society and its religious institutions. Drawing on a wide array of national and denominational statistics, they illustrate how the exodus that began with disaffected baby boomers and their parents has become so widespread that religiously unaffiliated Canadians are now the new majority. While the old mainstream Protestant churches have been the hardest hit, the Roman Catholic Church has also experienced a significant decline in numbers, especially in Quebec.

Canada’s civil society has historically depended on church members for support, and a massive drift away from churches has profound implications for its future. Leaving Christianity documents the true extent of the decline, the timing of it, and the reasons for this major cultural shift.