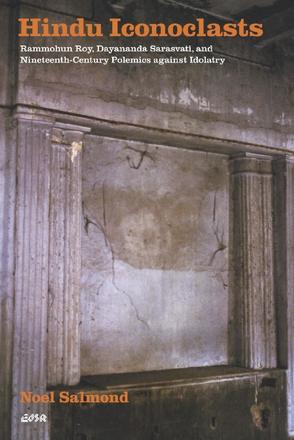 Why, Salmond asks, would nineteenth-century Hindus who come from an iconic religious tradition voice a kind of invective one might expect from Hebrew prophets, Muslim iconoclasts, or Calvinists?

Rammohun was a wealthy Bengali, intimately associated with the British Raj and familiar with European languages, religion, and currents of thought. Dayananda was an itinerant Gujarati ascetic who did not speak English and was not integrated into the culture of the colonizers. Salmond’s examination of Dayananda after Rammohun complicates the easy assumption that nineteenth-century Hindu iconoclasm is simply a case of borrowing an attitude from Muslim or Protestant traditions.

Salmond examines the origins of these reformers’ ideas by considering the process of diffusion and independent invention—that is, whether ideas are borrowed from other cultures, or arise spontaneously and without influence from external sources. Examining their writings from multiple perspectives, Salmond suggests that Hindu iconoclasm was a complex movement whose attitudes may have arisen from independent invention and were then reinforced by diffusion.

Although idolatry became the symbolic marker of their reformist programs, Rammohun’s and Dayananda’s agendas were broader than the elimination of image-worship. These Hindu reformers perceived a link between image-rejection in religion and the unification and modernization of society, part of a process that Max Weber called the “disenchantment of the world. ” Focusing on idolatry in nineteenth-century India, Hindu Iconoclasts investigates the encounter of civilizations, an encounter that continues to resonate today.