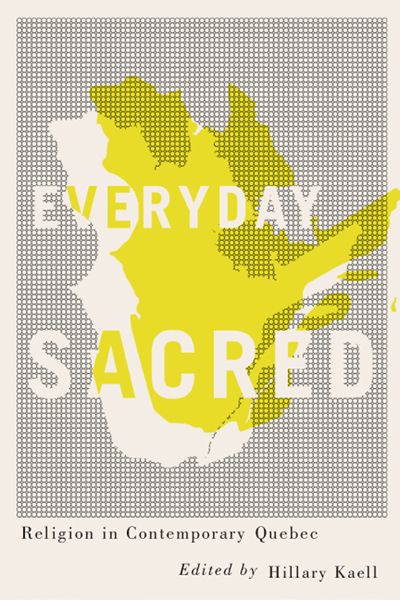 Over the last decade there has been ongoing discussion about the place of religion in Québécois society, particularly following the proposed Charter of Quebec Values in 2013. The essays in Everyday Sacred emerged from this active and often tense period of debate.

Revitalizing an awareness of how people encounter, create, and employ religion in everyday life, contributors to this volume explore communities’ networks of beliefs, traditions, and relationships. Through broad comparisons beyond the Quebec context, contributors look at African Pentecostal congregations, an Iraqi Jewish community in Montreal, a rural Catholic parish on the Saint Lawrence River, and Tewehikan drumming in Wemotaci. They also examine wayside crosses, places of pilgrimage and devotion, debates on the regulation of the hijab, and the place of Montreal Spiritualists and transhumanists in the religious landscape. Seeking a holistic definition of Québécois religion, Everyday Sacred considers religious and secular identity, pluralism, the bodily and material aspects of religion, the impact of gender on community and the public sphere, and the rise of hybridity, sociality, and new technologies in transnational and online networks, in order to uncover the transmission of practices and beliefs from one generation to another.

Disrupting familiar dichotomies between Catholicism and other religions, “founders” and immigrants, new religious movements and traditional institutions, Everyday Sacred marks the beginning of a sustained conversation on contemporary religion in Quebec, both inside and outside of the province.