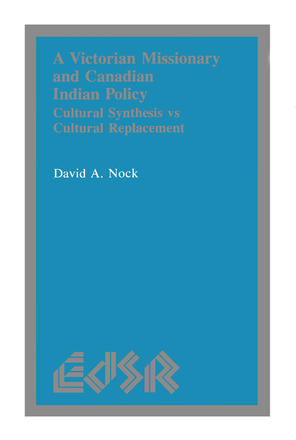 Canada’s Indian policy has, since the 1830s, consisted mainly of attempts at cultural replacement. Although rarely practised, cultural synthesis of native and western cultures has been advocated as an important alternative especially in the last ten years. This book is a study of E. F. Wilson (1844–1915), a Canadian missionary of British background, who experienced, promoted, and advocated both approaches to native policy during his lifetime. On the one hand, he practised cultural replacement at the Shingwauk and Wawanosh Schools which he founded at Sault Ste. Marie; on the other hand, he advocated programs of cultural synthesis and political autonomy which were a distinct departure from the paternalist notions of the 1880s and 1890s. His support of such ideas was fostered by the influence of leading anthropologists such as Horatio Hale but also by his own extensive travel and observation of Indians, particularly the Cherokee Indians of Oklahoma.

This book describes the efforts of a nineteenth-century Canadian missionary who entertained radical notions of Indian self-government and cultural synthesis, as well as more conventional ideas of native assimilation and cultural replacement.