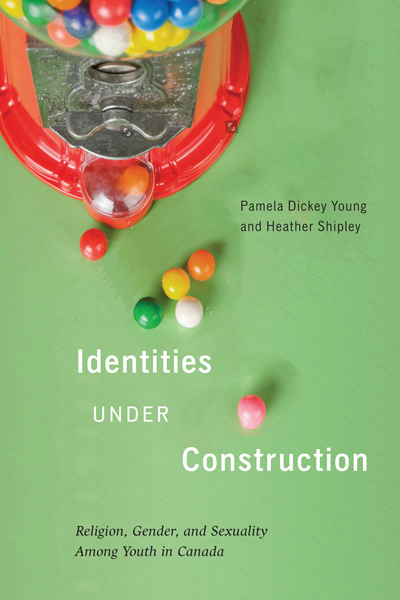 Growing numbers of young adults are either nonreligious or “spiritual but not religious,” but this does not signal a lack of interest in religion and meaning-making. Though the lexicon describing sexuality and gender is quickly evolving, young people do not yet have satisfactory language to describe their fluid religious and spiritual identities.

In Identities Under Construction Pamela Dickey Young and Heather Shipley undertake a focused study of youth sexual, religious, and gender identity construction. Drawing from survey responses and interviews with nearly five hundred participants, they reveal that youth today consider their identities fluid and open to change. Young people do not limit themselves to singular identity categories, experiencing the choice of one religion, of maleness or femaleness, or of a fixed sexuality as confining. Although they recognize various forces at work in identity construction – parents, peers, the internet – they regard themselves as the authors of their own identities. For most of the young adults in the study, even those who are most traditionally religious, religious opinions and values should adapt to changing social mores to ensure that people are not judged for their sexual choices or identities. Further, they are not judgmental of others’ choices, even if they would not make these choices for themselves.

Engaging religion and sexuality studies in new ways, Identities Under Construction calls for a new grammar of religion that better captures lived realities at a time when religious choice has broadened beyond choosing a single organized religious tradition.

The Ironic Charisma of an Irreligious Megachurch
By Peter J. Schuurman
June 2019